A CPU or graphics card may analyse and receive collected video in real time when using a Datapath VisionLC-HD Single Channel HDMI Capture Card. The VisionLC-HD offers the capacity to effectively transport the video signal in a format appropriate for rendering or encoding applications by supporting on-board colour space conversion and scaling. The 32, 24, 16, and 12 bit YUV and RGB codecs are natively supported by the VisionLC-HD.

VisionLC-HD capture card has been designed for use within application models such as:
Medical environments
Simulation systems
Live events
PC and gaming console capture
Lecture and presentation capture
Real time streaming
It is also possible to put more than a single card into a system for multiple capture channels.

Built upon the Microsoft AV stream model, VisionLC-HD inputs can be accessed and enumerated in any DirectShow or Media Foundation supported application. A video for Linux (V4L) driver package is also available to download. 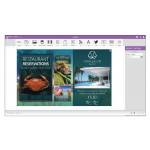