vMix 4K Live Production Streaming Mixing Software supports up to 1000 sources, including virtual as well as hardware sources. In practice, the total number will depend on the limitations of your computer, GPU, and capture hardware. An average workstation configuration with dedicated GPU can support about eight HD (or two 4K) sources.

Use a video I/O card such as a Blackmagic or AJA product to capture from a live camera or external video feed. Up to 4K resolution is supported, depending on the limitations of the card and computer hardware.

There is a built-in audio mixer so you won't have to rely on a separate hardware mixer. Audio can be sourced via embedded audio, the capture device's audio inputs, through a separate audio interface, or even be played from a pre-recorded audio file. 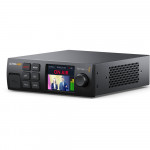 Blackmagic Design Web Presenter 4K BDLKWEBPTR4K is a compact desktop device that allows you to conne.. 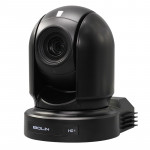