ATEM Television Studio Pro 4K combines a professional broadcast hardware control panel with a powerful 8 input 12G-SDI switcher for working with all HD and Ultra HD formats up to 2160p59.94. All of the 12G-SDI inputs feature full re-sync and independent format and frame rate conversions. That means customers can connect a total of up to 8 different sources with various different frame sizes and frame rates, and cleanly switch between them. The switcher automatically converts everything to the program’s output format and frame rate. 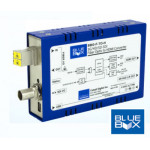 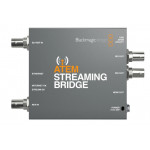